Camouflaging for the Automotive Industry

The series production of each car begins with a pre-production vehicle that incorporates all the latest technology and design innovations available on the market at that time. Automotive manufacturers use these prototypes to test the increasingly complex systems in their vehicles in real traffic situations before going into series production.

All technical configurations and design features are still subject to secrecy at that particular time and therefore, in order to retain the competitive edge, it is important to hide them from the public. The manufacturers rely on a complete camouflage package, which they can individually adapt to the current development progress of the series. Formel D is experienced in handling pre-production vehicles and camouflaging the interior and exterior of your prototypes.

The experienced Formel D employees ensure professional handling of your project and consider the interests of the various parties involved from the design and development departments on the manufacturer’s side. This way, the experts develop a complete camouflage package in constant coordination with the customer and simultaneously make sure that the applied processes will have as little influence on the measurement results as possible during later test drives.

For interior camouflaging we offer the services of our own production facility, which is specified in sewing interior coverings.

Read More About Our Camouflaging Services.

Formel D is Your Reliable Partner for Vehicle Camouflaging 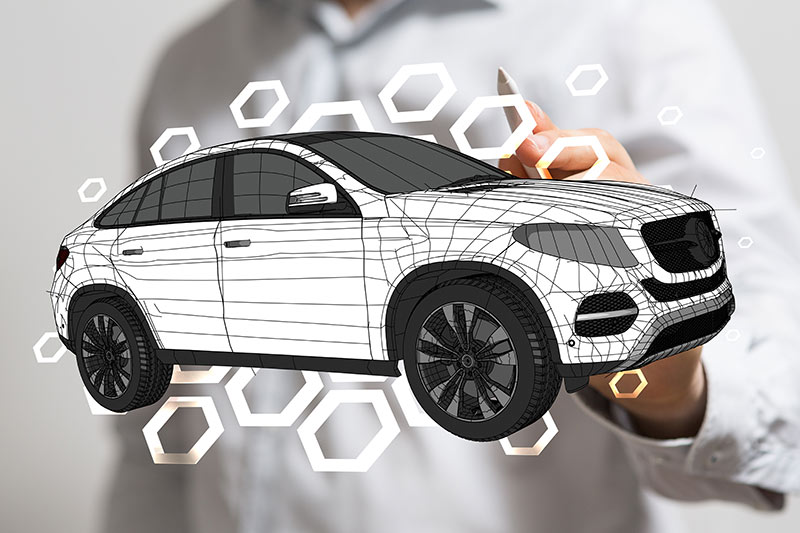 Camouflaging Starts With the Design

The starting point of an automotive project phase is the briefing by the manufacturer, who provides Formel D with the requirements in terms of the camouflage scope, the number of vehicles to be tested and the respective development phases. Based on this, the service provider’s staff will then prepare a product specifications sheet containing a detailed description of all the components of the interior and exterior to be modified for the upcoming series.

At the beginning of the actual concept phase, they produce a CAD construction of the model and, in close cooperation with the client’s contact person, determine the materials and the actual scope of the camouflage. For example, it may be based on the state of development of the real prototype or on the number of innovations. During the conception phase, the employees also pay attention to the customer-specific camouflage standards, determine the need for any special camouflage requirements and on this basis create a first virtual representation of the individual parts to be mounted on the vehicle. Formel D then coordinates the release levels, which vary according to the manufacturer, and immediately applies all change requests into the simulation.

From Model to Application

After final approval by the customer, the service provider first issues to have the deep-drawn parts made of ABS, a thermoplastic terpolymer, for an average of five to ten vehicles. After these moldings are produced in a special thermoforming process, they can thereafter be screwed to the vehicle body and serve to disguise the design. Parallel to this, Formel D employees process so-called polyethylene inserts, which they produce based on the CAD data on a CNC-controlled milling machine and then rework into the desired three-dimensional shape.

As soon as the first future prototypes roll off the assembly line, Formel D picks them up and transports them in a closed truck “off campus”. Once they arrive at the prototype-proof development workshop, the team begins immediately with the attachment of the camouflage pieces and the subsequent foiling and covers the interior with specially made fabric and foam applications. Subsequently, the first fully camouflaged vehicle passes through another customer acceptance loop followed by a test in the wind tunnel, during which the experts check all aspects relevant to holistic testing, such as noise, stability of the individual parts and contact pressure. Roadworthiness is confirmed by the TÜV (Technical Inspection Association).

As product maturity progresses towards market launch, the number of camouflage elements is gradually reduced. Depending on the development stage, the service provider team varies the use of the materials: While the camouflage of the disguised prototype at the beginning of the testing process still features up to 70 parts per model, this number decreases continuously until just before the start of mass production. In this phase, the pre-production vehicle usually requires only partial camouflage of individual components, which may affect both interior and exterior.

In order to ensure exact reproducibility of the prototype camouflage, the Formel D employees document all work steps in writing. This documentation of the production series, the derivative or the design line serves as a guide for the attachment of individual parts for the respective model fleet and is handed over to the customer together with the vehicle.

After the completion of the safety phase and the final release of the first pre-production vehicle per model series, the main camouflage process for Formel D begins. At this point, up to 200 vehicles per month go through the prototype-proof development workshop, which includes a buffer zone and capacities to work in parallel on up to 30 vehicles. According to demand, the specialists order the required components and materials for the entire prototype of a series commissioned by the manufacturer and also keep a reserve supply in the warehouse. This way, the parts can be applied to the successively delivered vehicles without delay. The finished models are usually returned by the company’s own transport fleet directly to the customer within 48 hours.

Formel D is currently processing more than ten series models with an average of two to three derivatives in parallel. Depending on the deployment speed of the vehicles, there may be fluctuations in the delivery intervals, which the 50 employees of the Formel D camouflaging team can meet flexibly. For example, they switch from two- to three-shift operation, if necessary. This ensures consistent quality standards even with changes occurring at short notice and ensures that the team is available to the customer at any time during the entire project and that they can respond individually to their requirements and wishes.