The ACTIONBLUE art campaign is taking place as part of GLOBALE, an art event by ZKM | Center for Art and Media Technology Karlsruhe. From 18 June until 7 August 2015, HA Schult, the Cologne-based artist, is travelling from Paris – Beijing in a Toyota Prius. During this journey he takes out water of rivers and seas and creates “Biokinetic Pictures” with it. 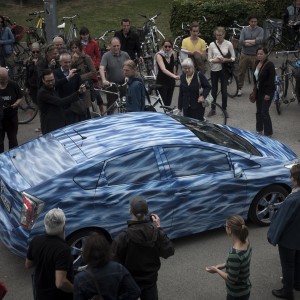 Formel D is supporting ACTIONBLUE as a partner for technical realisation, along the entire route of approximately 18,000 km from the start in Paris to the destination in Beijing. As a global service provider for the automotive and supplier industry, Formel D has access to local resources and can therefore provide the technical support needed to keep the art campaign mobile.

“We were immediately won over by HA Schult’s ACTIONBLUE because it links the challenges for sustainable natural resources, such as air and water, with the latest economic trends and technological innovations”, said Dr. Holger Jené. These views are also Dr. Jürgen Laakmann and Claus Niedworok and add: “As a partner we are pleased to be able to use our international service network and expertise in vehicle technology and parts management to support ACTIONBLUE.”

ZKM | Karlsruhe is presenting the project as part of the GLOBALE art event for Karlsruhe 2015, the city’s 300th anniversary celebrations. The project is supported by the Federal Republic of Germany, the People’s Republic of China, and the Grand Duchy of Luxembourg. Further partners are Darmstadt’s Technical University, RWTH Aachen, the University of Duisburg-Essen, Tongji University in Shanghai, as well as the UNESCO and private sponsors.

ACTIONBLUE aims to make apparent the cultural effects of globalisation. At the same time the context is disclosed between art, science and technology, digital revolution and democratic development. HA Schult is one of the first artists to make environmental disparities a focus of his work. During the tour he will make more than 27 stopovers including in France, Germany, Poland, the Baltic states and Russia, as well as in Mongolia and China. He is taking roughly the same route as the legendary 1907 Beijing – Paris Rallye, now seen as the mother of all car races. One of the highlights of the art campaign will be a press conference in the Gobi Desert on 1 August 2015.