In its 25-year anniversary, Formel D has exceeded the 10,000 employees mark. “Anniversary colleague” Sandra Lopez Moya was surprised with a cake in her first week of work in Stratford upon Avon (UK) together with her new colleagues, arranged by José Luis Estévez (Vice President Western Europe at Formel D) and Neil Davies (Director Operations at Formel D in UK). 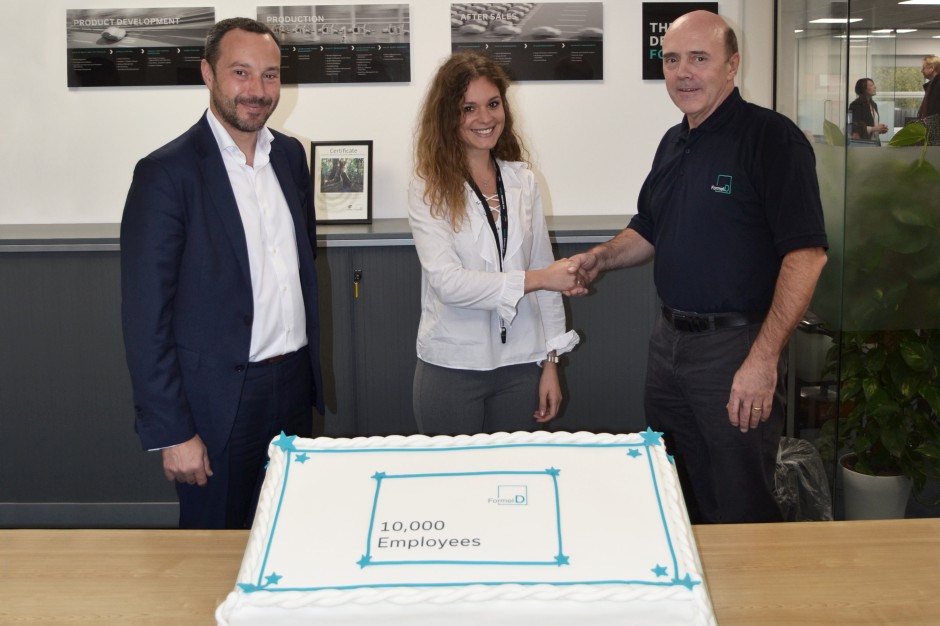 Sandra Lopez Moya won’t be forgetting her first day at Formel D any time soon. The recently hired recruiter was welcomed by Director Neil Davies and Vice President José Luis Estévez with a cake, which she then got to share with her new colleagues. The reason for the XXL-sized cake? Thanks to Sandra Lopez Moya, the Formel D team is now 10,000 strong. « I’m very happy about this great surprise, » the 27-year-old Spaniard says. « I was well received by all my colleagues here and very glad about the opportunity to work for Formel D. »

Dr. Jürgen Laakmann, CEO of Formel D, is also pleased by this round number of employees in the company’s anniversary year. “The dedication of our employees all over the world is the basis for our successful path towards growth. I am glad that we at Formel D have such a strong, now five-digit team supporting us,” says Laakmann. “In the UK, we’ve had quite the successful year. By winning a major project, we were able to double our staff from 300 to 600.”